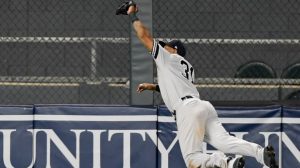 Two of the American League’s best teams went at it on Tuesday. In a battle between the first place Yankees of the American League East, and the first place Twins of the American League Central, the two teams put on a show at Target field in Minnesota. Yankees shortstop Didi Gregorious got the scoring started in the top of the 1st driving in 2 with a double in the gap. The Twins battled back in the second, with Luis Arraez driving in a run to bring the score to 2-1. In the 3rd inning, Jorge Polanco hit a towering shot, immediately followed by a home run from Nelson Cruz. In the 4th, Miguel Sano extended the lead to 8-2, with a 3-run home run.

The Yankees made up ground quickly, as Didi Gregorious hit a 3-run home run of his own to bring the score to 8-5. Several innings later it would be Gregorious again to hit a go ahead double in the 8th to put the Yankees ahead 10-9.

The Twins would answer back quickly, as Miguel Sano hit another home run, putting the Twins back ahead 10-11.

However, with two outs in the 9th and a runner on, Aaron Hicks hit a two run home run of his own to put the Yankees ahead 12-11.

The Twins would tie the game in the bottom of the 9th after Aroldis Chapman walked the bases loaded.

The Yankees would then take the lead in the 10th thanks to a clutch hit from Gleyber Torres.

The game finally ended after outfielder Aaron Hicks made a spectacular diving grab with the bases loaded and two-outs to stop the Twins last threat, and secure the win for the Yankees.