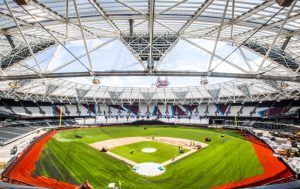 Consistent with Major League Baseball’s efforts to grow exposure to the game across the globe, NL East rivals New York Yankees and Boston Red Sox took their historic rivalry across the Atlantic to play the first MLB games on European soil in London, England. London Stadium was packed to the brim for both games of the two-game series, and fans were treated to a plethora of offense.

Game 1 got started with a bang, as the Yankees lineup chased Red Sox starter Rick Porcello from the game early. Porcello was tagged with 6 runs only going 1/3 of an inning. The 6-0 Yankees lead did not last long as Yankees starter Masahiro Tanaka also gave up 6 runs going 2/3 of an inning. The offense didn’t stop there as the each team had another 6 run inning at different points in the ball game. However, the Yankees prevailed, winning by a score of 17-13.

In game 2, the offensive showcase picked up where it left off as the Red Sox hit 3 home runs in the first inning. After that, pitching seemed to settle down for both teams until the Yankees put together an astounding 9 run inning in the 7th. The Yankees would hold on for the London Series sweep winning game 2 by a score of 12-8.

The Yankees offense is very dynamic and potent, and the team looks to be the strongest it has ever been in years. Despite various injuries to start the year, they have shown that their depth and adaptability is one of their greatest strengths and hope to be in contention come late October.