Veteran Pineyro Settling in With Durango 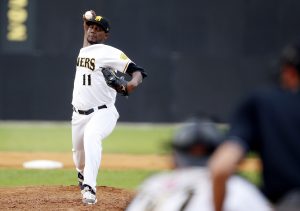 Sportslynx client, veteran RHP SP Ivan Pineyro of the Generales de Durango, is settling into his role in the rotation. While Pineyro has posted a serviceable 4.71 ERA in his 2019 campaign thus far, he has come through in some big games for the Generales. On June 12th, Pineyro threw 6 2/3 innings allowing just 1 run over 4 hits winning a pitchers duel against the Rieleros de Aguascalientes.

Pineyro is a 27 year old 6-1 200lb veteran starter who has been in the pros since 2011. He was drafted by the Nationals, and bounced around with different organizations such as the Marlins and Angels before establishing himself in the Mexican league.

Pineyro has thrown 28.2 innings with 6 starts this year, but some numbers that stick out are his WHIP, BABIP, and LOB%. Pineyro’s WHIP (walks/hits over innings pitched) is sitting at a decent 1.43 so far which is fairly consistent with the rest of his career. His BABIP (Batting Average for Balls in Play) is at .291, but Left-handed hitters are only hitting .195 off of him. The statistic that I am most fascinated by is his LOB % (left on base %). Pineyro’s LOB%  is high at 80.4%, meaning that he is very good at working out of jams, and pitching in high stress situations, leaving runners on base. Perhaps Pineyro can work out of the bullpen if that opportunity presents itself.