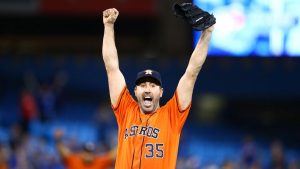 Justin Verlander recently joined the elite company of pitchers such as Nolan Ryan, Sandy Koufax, and Cy Young, by becoming just the sixth pitcher to have thrown 3 no-hitters in his career. On September 1st, Verlander no-hit the Toronto Blue Jays, only allowing one walk in the 4th inning to Cavan Biggio, while striking out a total of 14 batters. It is also note worthy that it was his second time no-hitting the Blue Jays at Rogers Centre.

Verlander’s career has had somewhat of a resurgence ever since he joined the Houston Astros following a trade from the Detroit Tigers in 2017, the only other MLB team he had been with. In the latter years in Detroit, he had seen his once 100+ mph fastball velocity diminish, and his command fade. However, in his time with the Astros, he is back throwing in the upper 90s, along with a very sharp curve.

Verlander is going to be a crucial component to the Astros World Series push, headlining one of the best pitching staffs that the sport has seen in a very long time.