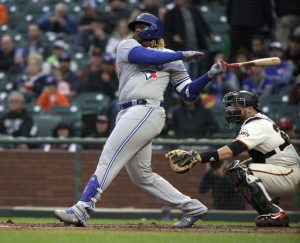 Earlier this week, one of baseball’s most anticipated prospects finally took the field at the major league level. After several debates regarding service time and injuries, Vladimir Guerrero Jr., son of hall of famer Vladimir Guerrero Sr., finally got called up by the Toronto Blue Jays.

Guerrero provides an immediate boost to a rebuilding Blue Jays lineup, and represents a change in tide to a team that is trying to compete in the very competitive AL East. He has ridiculous power, a great arm, and is considered to be one of the best all-around prospects the game has seen in years.

After starting 2019 on the injured list, Guerrero got called up in mid-May, and struggled in his first few games. However, this past week, his bat has seemed to start to heat up as he now has 3 home runs on the season. He hit his first two in San Francisco, and they were absolute moonshots.

He also hit his third home run last night against the White Sox.

It is definitely an exciting time for baseball fans as many of the game’s top prospects are beginning to be called up by their respective teams. The rookie of the year race will be a fun one to watch, and hopefully all these players can provide the boost their teams need to make playoff pushes.