Sportslynx Client Tony Kemp Walks It Off for Astros 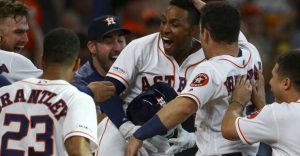 MLB Veteran and Sportslynx client Tony Kemp came through in the clutch this past weekend for the Houston Astros. The Astros were playing at home against the Cleveland Indians, and Saturday’s game featured late scoring innings off both team’s bullpens. Kemp came into the game as a pinch hitter in the 10th inning, and was able to take a sinker from Indians pitcher Adam Cimber over the right field wall.