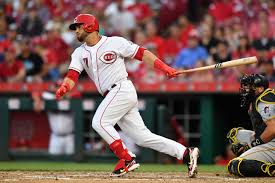 Amidst this year’s power showcase across the entire league, the top of the home run leader boards has been a fairly consistent battle between the likes of Cody Bellinger, Christian Yelich, Pete Alonso and Mike Trout. Also among that group is Cincinnati Reds slugger, Eugenio Suarez. The Reds 28 year old third baseman has been on a hot stretch recently that has put him in the race for the home run lead. This past weekend in Arizona, he hit his 46th and 47th home runs, tying him for the lead with Mets rookie Pete Alonso.

Suarez is coming off a 2018 campaign where he hit 28 homers and 104 RBIs over 606 plate appearances. With still 2 weeks left in the 2019 season, he has hit his 47 home runs, with 100 RBIs over 611 plate appearances. These numbers are proving the Reds front office made a great decision signing him to a seven year, $66 million contract this past off season.

With that contract extension, the Reds are betting on their third baseman of the future, in hopes that he will continue to be one of the leading power hitters in the game for years to come.