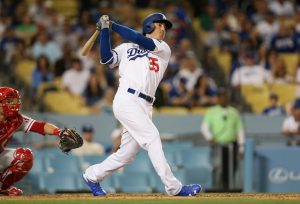 With the numerous variables that are measured and collected by STATCAST technology, it’s easy to be overwhelmed with the vast amount of information presented. The most commonly discussed variables pertaining to offensive production are exit velocity and launch angle. With that being said, I thought it would be interesting to look at how hard contact % correlates to common offensive statistics such as BA (batting average), SLG (slugging percentage), BABIP (batting average for balls hit in play), and wRC+ (weighted runs created). For this investigation, I’ll be plotting hard contact % for a sample of 145 players for the 2019 season so far, against the listed offensive statistics as the dependent variables, and running a linear regression test to generate a R-squared coefficient in order to determine the strength of that correlation. 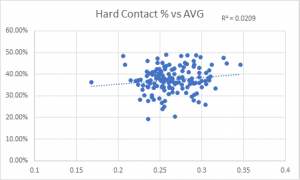 We’ll start with the most straightforward statistic of batting average. How does a player’s hard contact % relate to batting average? According to the data, there isn’t a strong relation. On a scale from 0-1, the correlation coefficient (R-squared) is calculated at 0.02, which is very weak. A reasonable explanation for this would be that batting average weights all hits equally, including bloop singles and grounders that may just get through the infield. 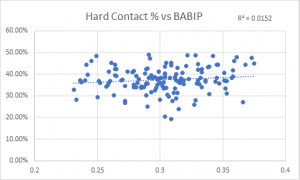 Batting Average for balls in play is exactly what it says. It essentially accounts for the player’s batting average strictly for balls that the hit into the field of play, mitigating for strikeouts. Looking at this plot, we can see that this correlation coefficient is even lower than the plot above. The reasoning above applies to this statistic as well. 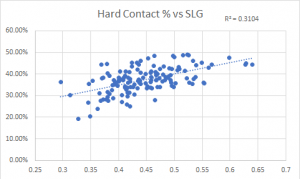 Slugging percentage is a very common way to determine a player’s power production. This is a good variable to plot against hard contact %, as it would make sense that a player with a higher hard contact % would have higher power output. The corresponding plot supports that claim. Slugging percentage has the highest correlation coefficient, which signifies the strongest relationship to hard contact % amongst the categories being investigated. 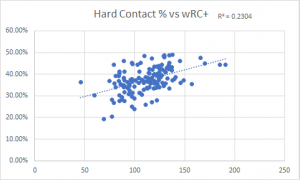 For those unfamiliar, weighted runs created is essentially a measure that allows for the assessment of hitters by calculating the runs they are responsible for creating, independent of confounding variables such as ballpark factors. wRC+ has a fairly strong correlation coefficient in comparison to the other statistics being investigated.

To conclude, I think any team would welcome a player with a high hard contact %. However, I think that this investigation can provide some insight for teams who are looking to fill a certain role in their lineup. For example, a team looking for a power hitter should put more weight to the hard contact % in comparison to a team looking for a hitter that perhaps hits for average.