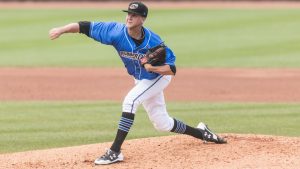 This next interview is with pitcher Jake Paulson. Paulson is currently a member of the Akron Rubberducks within the Cleveland Indians organization. Drafted in the 27th round by the Reds in 2014, Paulson has thrown at least 130 innings the past two seasons (2018/2019). This past season with Akron he posted a 3.66 ERA.

JP: The adjustment has been smooth, the games go by a lot slower here. The speed of the game isn’t as fast. The competition is really good and I think it’s a great opportunity to go play winterball. The fans are amazing, almost every game is sold out.

JP: I want to help the team win and get better of course. I want to work on the things that I need to work on and keep improving my game.

JP: This is my first time playing winterball, I didn’t really know what to expect. I heard from my other teammates that it’s a lot of fun and if you have they opportunity to go play, then you should. My Spanish isn’t very good, so at first it was tough trying to order food at restaurants. They have apps for everything so I use my translator app almost everyday. Some guys on the team know Spanish and English so they help you out a lot. You usually always go out with your teammates so everyone helps each other.

JP: I love the game of baseball. My ultimate goal is to play in the Major Leagues. I want to keep on getting better and hopefully that will get me to the MLB.