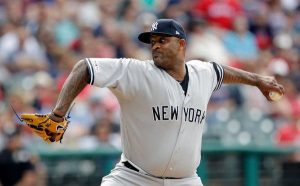 The New York Yankees just clinched the American League East Division for the first time since 2012 this past week, and are one of the favorites to play into early November. Amidst a team that powered through various injuries, the Yankees depth has proved to be their strong suit as various rookies and veterans alike have stepped up to maintain their place atop the standings. Veteran left-hander C.C Sabathia stepped up big to fill various gaps in the Yankees rotation this year. With ace Luis Severino just returning to the rotation, and James Paxton missing time earlier in the year, the Yankees had to turn to the 19 year veteran to eat innings and remain competitive.

Sabathia has posted a 4.99 ERA in 2019, going 5-8 over 22 games. The Yankees envision him as a crucial bullpen piece come the ALDS and the rest of the playoff picture. However, on Sunday, Sabathia’s career was celebrated prior to the Yankees game against the Blue Jays. He spent the past 10 years in the Yankee pinstripes, along with time spent with the Indians and Brewers.

C.C has a career 3.74 ERA and has racked up 251 Wins and 161 losses with over 3000 strikeouts. He was a crucial part of the Yankees most recent World Series run, and hopes to be a contributor to their 2019 campaign.