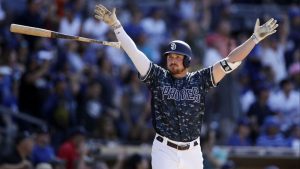 Surprisingly, it took until May for the new look San Diego Padres to face off against their NL West Division Rival in the Los Angeles Dodgers. There was much anticipation leading up to the series. The Dodgers are fresh off another runner-up World Series appearance, and the plethora of young talent on the Padres roster wanted to measure themselves against arguably the team to beat in the entire league. Unfortunately, the Padres were without one of their brightest stars in shortstop Fernando Tatis Jr, who was placed on the IL last Sunday with a hamstring injury.

Nonetheless, the first two games of the series were very competitive. Both games seemed to follow the same script, as the Padres were able to build an early lead, yet lose it late in the game after the Dodgers were able to scrap runs together. The Padres struggled with runners in scoring position, leaving multiple runners on base to end innings. The Dodgers were able to close both of those games out, with Kenley Jansen shutting the door in each.

Oddly enough, the final game of the series was unfolding in a similar manner. Right away, Franmil Reyes hit a mammoth homer that measured over 450 feet. The Padres once again built an early lead, losing it late in the 8th inning after Chris Taylor hit his second home run of the weekend. The Dodgers brought Jansen in once again. However, this time the momentum seemed to sway in the Padres favor. Eric Hosmer led off the inning with a base hit, and Manuel Margot and Wil Myers both followed with bunt base hits. The bases were loaded with 0 outs and the Padres seemed to have a chance at clinching a victory.

The momentum then took another turn as Greg Garcia struck out, followed by Francisco Mejia popping out within the infield. With two outs in the 9th and the bases still loaded and the Padres down by 1 run, Hunter Renfroe pinch hit.

Renfroe was able to take a leaking cutter over the plate down the left field line for a walk off grand slam.

It was an unbelievable moment, and one that will be remembered by Padres fans for years to come. It will be interesting how this division battle unfolds over the course of the rest of the season.