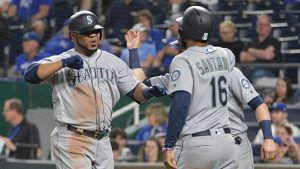 Behind the 12-2 record has been an unexpected power surge, as the Mariners have hit a home run in each game to start the season. They lead the MLB with 34 home runs, and have the highest team slugging percentage at .588. They have the largest run differential in the entire league at +41.

The Mariners have experienced offensive contributions all across the lineup, with familiar names such as Jay Bruce, Edwin Encarnacion and Mitch Haniger having a handful of home runs each.

It will be interesting to see if the Mariners can maintain the momentum, and if they can hold off the tough division rivals in the Houston Astros and Anaheim Angels.