This week, I had the chance to talk to 1B/OF O’Koyea Dickson of the Generales de Durango. Dickson has had the unique experience of playing baseball in the U.S., in addition to playing for the Nippon Professional Baseball League in Japan and now in Mexico.  This year in Durango he is hitting well, slashing .327/.392/.598. Dickson prides himself on coming thru in the clutch, and relies heavily on his advanced hitting tools. 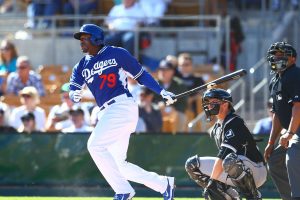 Below is the interview with Dickson.

AD: What do you think of your experience playing in the Mexican League thus far? How would you say the style of play compares to the minors in the US?

OD: My experience has been good. It’s a different transition from the States and Japan but nonetheless it’s baseball. And I enjoy the game and having fun. I would say the travel is very tough; at times it compares to the lower levels in the minor leagues as far as the travel is concerned. Some travel is a bit better when you fly but sometimes the layovers can be a bit long, unfortunately. It’s a competitive league with a lot of good players on each team.

AD: I noticed that you also played in Japan in 2018. What would you say about the transition from playing in the States to playing internationally?

OD: Having a chance to play in 3 different countries now is something I will forever be grateful for. When you play in the different countries you have to adjust to THEIR CULTURES and you have to embrace it or else you’re not gonna have fun or succeed. Some things are different from the States but as long as you’re ready to play once the game starts nothing else really matter. Enjoy, have fun and compete.

AD: What would you say is your greatest attribute? What do you bring to the table that helps a team win?

OD: My greatest attribute will probably be my hitting ability. Somehow I seem to find myself in big situations most of the time during the game. I pride myself on helping the team win by contributing anyway I can, whether it’s hitting, defense or base running I just want to win and help my teammates. I feel like I try to bring good energy, positivity and fun to a team.