This week, I had the opportunity to talk to 1B/OF Jon Kemmer of the Los Angeles Dodgers organization. Kemmer is hitting .242, with a OBP of .329 and slugging .519 over 70 PA thus far in AAA Oklahoma City.  He was previously with the Astros and Twins organizations, and was picked up by the Dodgers after a stint with the Generales de Durango, where he hit .355/.454/.714. I talked to him about his experience in Mexico, and how it has helped him and his career. 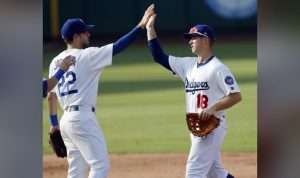 AD: I understand that you were with the Twins organization before going over to Durango, what was your perception of the Mexican league before that, if you had one?

JK: No, I didn’t have one at all. I didn’t know too much about the Mexican League. I was introduced to it through my wife and social media. Once we got a little information, we quickly learned about the great environment and great baseball down there.

AD: What was the adjustment period like to the league?

JK: To be honest, it wasn’t a huge adjustment. It’s run very similar to minor league ball in the states. They do a very good job down there. The fans were also unbelievably welcoming, it was such a great environment to play in. It was hard not to be into the game because the fans cared so much about the game down there. It was probably my favorite part of being down there. It’s actually why I signed to play winter ball in Guadalajara. I’ve never played winter ball, but that experience led me to sign up for that. Also, I had teammates who followed a similar path to me that helped me with the language barrier. Lots of my teammates would help me out whenever we had team meetings, so I was always kept in the loop.

AD: How was the competition? From the people who I’ve talked to that have gone from the minors to the Mexican League, one of the most notable differences is the amount of off-speed/breaking balls thrown by pitchers. Is there anything in your skill-set that you feel you further developed due to your time with Durango?

JK: Yeah, there is definitely a variation in the pitching. The pitchers do throw a lot more off-speed and breaking balls, and that was one of the biggest adjustments I had to make as a hitter. And I actually think it helped me further develop as a hitter. I’ve been able to hit the breaking ball better. The competition as a whole is definitely improving. I noticed that after competing in the All-Star Game. There are several guys in the league who have big league service time.

AD: What attributes of that experience will resonate with you the most? What have you taken from your experience in Mexico that is helping you with the Dodgers organization now?

JK: Yeah, definitely hitting the breaking ball better. I’ve now had to adjust back to hitting high velocity in the States. But more generally, it was the most fun I had playing baseball in a while. It wasn’t cutthroat, there wasn’t a lot of pressure, and it was a lot more fun. My time down there really reinvigorated my love for the game. If I were to have a bad game, I wouldn’t have to worry about checking the lineup the next day. I was really allowed to work through my slumps and that really helped me become a better player.

I also further developed an analytical mindset, working with Tony (Dahbura) and his work with Durango. I think its a crucial part of the game now, and checking reports is now part of my routine every day that I go to the ballpark.

AD: How did Sportslynx help you throughout this process?

JK: Much of Tony and Sportslynx work was helping players and the team buy into analytics. There are some components of the play that are more old school. So they did a lot to help out with the analytics and incorporating shifts and what not. He really made an effort to help bring out the best in players.