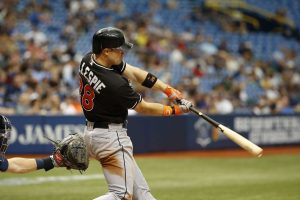 Cole Gillespie is an outfielder with multiple years of MLB experience, in addition to experience playing abroad in Mexico. A 3rd round pick from Oregon State in 2006, Gillespie 34, broke through to the majors in 2010, and had notable seasons in 2015-2016 with the Miami Marlins. He hit for .290 in 2015, and holds a .255 career average in the majors. Gillespie is also a great defender, and is comfortable all over the diamond. Most known for playing in the outfield, he holds a .935 fielding percentage.

In 2017, Gillespie ventured out to Mexico as a member of the Periocos de Puebla. He also played indy ball later that year.

After taking most of 2018 off, Gillespie has targeted another run in the Mexican league. He has made notable mechanical adjustments to his swing that aim to create more lift.

“I’ve been working with hitting coaches to refine my swing that makes it less of a push swing, to something that’ll create more lift, helping me drive the ball.”

These adjustments would play well in the league, and feels that his previous experience there would only benefit him this second time around. Gillespie would make a great addition to a team because of his experience, his versatility, and his familiarity with the Mexican league.

Gillespie has gone through much adversity in his career, and considers it one of his greatest attributes. He is considered to be a great teammate, and has said that he really enjoyed the atmosphere and style of the game in Mexico. He considers himself to be fresh and in the best shape he has ever been in, especially since he had a short 2018 season. Gillespie is excited to see what opportunities may present themselves.