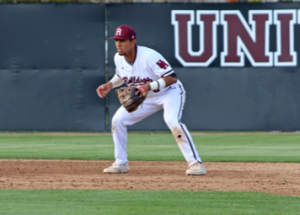 This week, we’ll be highlighting one of our newest clients, Aaron Singh. Singh is a 4-year NCAA college Middle Infielder from the University of Redlands. Singh will be graduating from Redlands with a degree in Business Administration, as well as a very decorated playing career.

Singh made an immediate impact for the Bulldogs hitting .275 in his rookie season, and pressing the opposing defense by being a threat on the basepaths in addition to his contributions at the plate. He then played college summer ball with the Battle Creek Bombers of the well-known Northwoods League. There, he credits the fierce competition and exposure to players from other universities as an integral component to his development as a player.

The following years at Redlands support that claim, as he established himself as the team’s shortstop. Singh had excellent sophomore and junior year campaigns. His sophomore year, he hit .364 and was named 1st team All-SCIAC conference. He followed up with an even better junior season, hitting .355 with 21 doubles, stealing 18 bases and also winning the NCAA D3 Rawlings Gold Glove Award for being excellent defensively. He also earned one of the highest honors by being named an All-American.

Singh is an excellent teammate, and his leadership helped the Bulldogs play well in their conference tournaments. He has a great work ethic, and is no stranger to playing at a very high competitive level. Even back in his high school days playing for Servite High School of the Trinity League, Singh played against numerous future college players and MLB draftees. In the offseason, he has worked out with MLB players.

Aaron is of Mexican heritage, and would be ecstatic to be able to play in Mexico. His mother was born in Leon, and would love for the opportunity to play in front of his family down there. He would be an excellent addition to a team that is looking for an all-around player that can be reliable defensively, as well as consistent offensively.