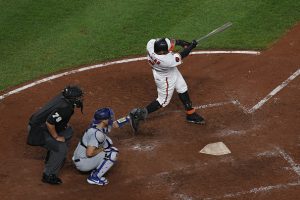 For the past few years, it has seemed that the number of home runs players are hitting have been increasing fairly rapidly. That statement has been proven true yet again, as MLB collectively has surpassed the previous record for the number of home runs hit in a season. Jonathan Villar of the Baltimore Orioles hit a 3 run home run against the Los Angeles Dodgers this past Tuesday, bringing the 2019 total of home runs hit to 6,806, with a few more weeks to spare in the regular season.

There are many hypothesis to the surge in home run numbers. While some have discussed the reasoning behind it to be attributed to hitters having a fly-ball/launch angle approach, other factors such as the actual physical properties of the baseball are also valid. There have been studies conducted that have investigated the height of the seams of the baseball, which have seemed to be lowered. The lowering of the seams reduces the drag (physical resistance) the baseball experiences while traveling through the air.

While some say that the spike in home runs is bad for the game, it is a reasonable answer to draw more attention to the sport that is constantly trying to find ways to keep viewership up. It will be interesting to see how the home run totals continue to rise, or if the pendulum will swing back the other way.