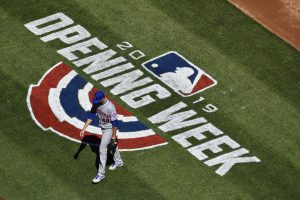 The 2019 MLB season has officially begun with all 30 teams partaking in their opening series’ this past weekend. Ballparks all across America were filled to capacity as teams and players embarked on a fresh start, new beginnings, and the marathon of a season towards the ultimate goal of winning the World Series in October.

This weekend featured the first appearances of stars in new places. Bryce Harper led the Phillies to a series sweep over division rival in the Atlanta Braves. Harper hit his first two home runs as a Phillie, and they seem to be one of the most entertaining teams to watch as the season unfolds.

On the West coast, the San Diego Padres made shockwaves across the league by placing coveted prospects Fernando Tatis Jr. and Chris Paddack on the Opening Day roster. Tatis immediately made an impact collecting a handful of hits over the weekend, and Paddack was very impressive in his first MLB start going 5 innings with 7 K’s and only surrendering 1 run. It will be interesting to see how they play in the NL West.

Reigning NL MVP Christian Yelich had a huge weekend as the Brewers won 3 of their first 4 against the St. Louis Cardinals. Yelich appears to be picking up where he left off last season, going 6 for 12 with 8 RBIs, 6 runs, and 4 HRs. The Brewers seem to be primed to make another strong playoff run with their offseason additions and playoff experience under their belt.

Baseball is back, and it’s an exciting time as all teams have a fresh start and plenty of opportunity. It will be interesting to see how the rest of the season plays out, and if there will be any surprise teams that will shake up the league.