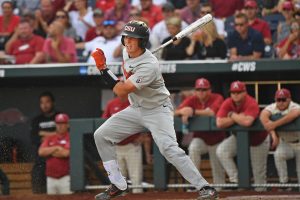 Yesterday, Major League Baseball concluded its annual first year player draft. After 3 days and 40 rounds, over a thousand players across the globe were selected by respective teams. For months leading up to the draft, the first round seemed rather solidified. Switch hitting catcher Adley Rutschman went first overall, after playing his 3 years at top NCAA D1 baseball university, Oregon State. The next 5 picks that proceeded Rutschman were all position players. It wasn’t until the Cincinnati Reds selected Nick Lodolo of TCU that a pitcher was taken. This was the first time this has happened in years.

There was a good mix of high school and college players taken in the first few rounds. Some notable high school picks include SS Bobby Witt Jr. of Colleyville Heritage HS (Texas), OF Riley Greene, Hagerty HS (Florida), SS C.J. Abrams, Blessed Trinity Catholic HS (Georgia), and SS Keoni Cavaco, Eastlake HS (California). High school prospects taken in these rounds are interesting because of the high upside and projectability of the players. It will be interesting to see how they adjust to professional ball after high school. Notable early round high school picks include Mickey Moniak, and Royce Lewis who were both taken #1 overall out of high school. Both met adversity early in their professional career, but seem to have adjusted well.

It will also be interesting to see how many of the picks actually end up signing with the teams that drafted them. As we saw recently, Carter Stewart was a high touted high school prospect who elected to not sign with his respective MLB team, and instead start his career overseas in Japan. Perhaps Stewart has paved the way for other prospects to choose international leagues instead of playing in the MiLB.