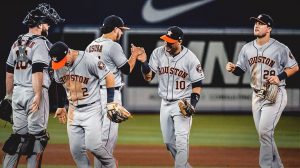 Unfortunately, the most discussed story this offseason hasn’t been about free-agent signings or blockbuster trades. As of last week, Major League Baseball concluded its investigation into the Houston Astros sign stealing scandal that was said to be prevalent in 2017. Commissioner Rob Manfred released a 9-page report that detailed the extent to which the Astros were found guilty of using technology to relay pitching signs so that hitters would know what pitches were coming. In result, Astros GM Jeff Luhnow and manager AJ Hinch were both suspended for a year by the league, and ultimately dismissed of their duties by the team.

This all started a few months ago when former Astros pitcher, Mike Fiers (currently now with the Oakland Athletics) spoke up about the issue, going on the record to say that the Astros had a camera in center field that would feed into a monitor near the dugout, allowing players to see what pitches were being called, and relay them to the hitter. Ultimately, it was found that Astros players would bang on a trash can to signal what type of pitch was going to be thrown, and it has been noticed by several analysts who have reviewed games from the 2017 season.

The extent of the fallout from the report remains to be seen. However, several prominent figures in the game have already faced the consequences. In addition to the Astros GM and manager being fired, Carlos Beltran also stepped down as the manager of the Mets before managing his first game. Beltran was a veteran on the 2017 Astros team, and was reported to be one the lead players involved in the sign-stealing process.