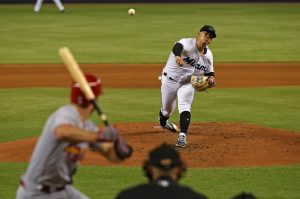 The current state of the Miami Marlins doesn’t put them in the position to contend for a division title, nor a wild card spot. However, this period allows them to call up talented prospects in their farm system and give them playing exposure at the major league level. On Wednesday night, the newest Miami Marlin, Jordan Yamamoto of Hawaii made his first MLB start, and shut down a very potent St. Louis Cardinals lineup to avoid a sweep.

Yamamoto pitched 7 scoreless innings, striking out 5 and throwing a total of 93 pitches. Yamamoto pitched effectively due to his ability to change speeds of his fastball which ranged from 93 to 87-88 mph. Pairing that with a good curveball, Cardinals hitters were kept off balance the entire night.

Yamamoto is just the next player to make an impact in the league from Hawaii. Former Phillie and Red Sox OF Shane Victorino was one of the most notable players to hail from the islands. Ironically, Yamamoto’s first strikeout was of fellow Hawaiian native Kolten Wong.

The opportunity for Yamamoto to make this start arose due to Jose Urena hitting the injured list. It will be interesting to see if Yamamoto can maintain this high level of pitching and force the Marlins hand to keep him at the MLB level.