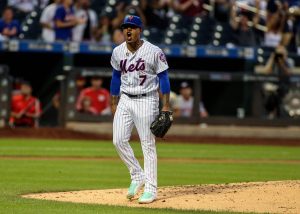 Before the 2019 season began, New York Mets GM Brodie Van Wagenen strongly felt that the squad he assembled would be at the forefront of the National League East Pennant Race. After marquee offseason acquisitions of 2B Robinson Cano and CP Edwin Diaz, Van Wagenen put out a message for the rest of the league; “come and get us”.

The Mets then proceeded to play mediocre baseball and limped to the all-star break. There were a number of misfortunes the team experienced, with bad on field production and injuries. However, Van Wagenen shocked the entire league by buying at the trade deadline rather than selling. With most around the game confident that he would trade frontline starter Noah Syndegaard, Van Wagenen elected to hold onto him, and additionally add another prominent starter in Marcus Stroman.

The Mets have been playing exciting baseball recently. They have capped off come back and walk-off wins, along with the pitching staff dominating the opposition. The staff has posted a 2.89 ERA since the break, and starters specifically have a 2.37 mark.

It will be interesting to see how the Mets close out the season, and whether or not this is a hot streak or the beginning of something special in Queens.