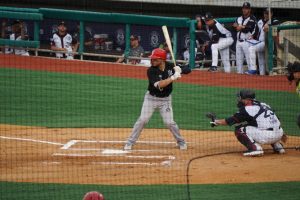 Exciting baseball is being played all over the globe, and LA LIGA MEXICANA DE BÉISBOL is no different. Earlier this week, Generales de Durango and Tecolotes de los Dos Laderos played a high scoring game with the Generales winning their first series of the season. The Generales put on quite the power display as three of their players left the yard en route to scoring 13 total runs in the game. Tecolotes were able to put up 6 runs with 2 home runs of their own, but it was not enough to earn the win.

Sportslynx client Jon Kemmer, who had just joined the teams after coming over from the Minnesota Twins organization has made an immediate impact. He was one of the Generales to hit a home run in this game against the Tecolotes. More to come on his profile later.