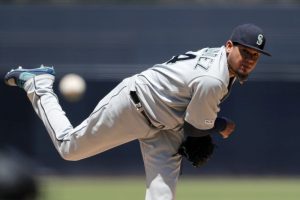 Mariners pitcher Felix Hernandez has been a household name for over the past decade. To his name, he has thrown over 2,500 innings, and has earned 6 All-Star selections, the 2010 Cy Young Award, and was the 2009 wins leader and ERA leader in 2010 and 2014. He also threw a perfect game in 2012.

Hernandez has been dominant for the majority of his career, however, he has had to make adjustments to remain competitive in today’s game. After a rough 2018 campaign, a season in which he was demoted to the bullpen at one point, it seems that he is in the midst of a career resurgence with a solid start to 2019 at 33 years old. Thus far, he is 1-2, and has posted a 4.31 ERA.

I wanted to investigate the possible reasons behind this resurgence, especially after his strong starts against the Padres and Astros. It has been known that Hernandez’s fastball velocity has dramatically declined, as it does for many pitchers as their age moves north of 30. However, in 2018, it seemed as if Hernandez struggled to make adjustments regarding his pitch selection which resulted in poorer results.

This first graphic shows Hernandez’s average fastball % per start over each season. The labels by the trendline are his average fastball velocities per season. From this, it is apparent that he has relied on his fastball less as the velocity started to diminish. What is interesting to note is that there was a significant drop in fastball % from 2013 to 2014. This is noteworthy because he made his last All-Star appearance in 2014. Additionally, the trendline remains relatively constant after 2014, which supports the idea that despite further diminishing fastball velocity, his reliance on his fastball remained relatively the same in the following years.

I generated another graphic to observe how he has used the other pitches in his repertoire as his fastball deteriorated.

What I find interesting about this graphic is that his curveball % has been rising dramatically since 2014. It seems to be at its highest in 2019, and could be one of the main reasons behind his recent success. Additionally, while he did throw a large % of change-ups in 2014, it seems he has gone to that pitch less as the years have progressed. A similar conclusion can be made regarding the slider, which he seems to have used the most early in his career. Based off this data, I conclude that he has gone to his curveball more because it plays well in contrast to his current fastball. Given his current fastball velocity, his change-up may not complement his fastball as well as it did when he threw harder.

While many pitchers in the MLB and MiLB are velocity oriented, Felix Hernandez is a prime example of how smart pitch selection can still lead to success. To bring up another point, Hernandez’s strategies mirror that of many in the Mexican League, as the pitchers there rely on mixing in off-speed pitches more than the counterparts up north. From the players I have talked to who have experience playing in Mexico, many credit this change in pace to further their development for both pitchers and hitters. Felix Hernandez is evidence that while velocity is and always be important, smart pitching and pitch selection can still lead to success, even at the MLB level.