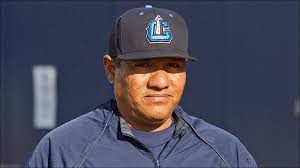 This winter, Rigo Beltran will be at the helm of the Algodoneros de Guasave, an expansion team for the Mexican Pacific League. Beltran has been the pitching coach for the Columbus Clippers, the AAA affiliate for the Cleveland Indians, for the past 6 years. In total he has coached for 13 years, after a 16 year playing career that spanned the globe. Beltran’s playing experience has allowed him to connect with his players on another level, helping them understand what it takes to make it through the long grind of a season. Beltran makes it an emphasis to treat each player on an individual basis, and help bring the best out of them. He hopes to continue that practice as the acting manager for the new expansion team this winter.

RB: I went to high school and junior college in San Diego, and transferred to the University of Wyoming after two years. After two years there, I was drafted by the St. Louis Cardinals. I had a 16 year career, 5 years in the big leagues, 12 years of winter ball, and a year with Japan. I coached in the Reds organization for 7 years, and the past 6 years with the Indians.

AD: So you’ve pretty much played all over the globe then?

RB: Yeah, I’ve moved around a lot. A part of the 16 years, I had a few injuries that I overcame, so I can definitely relate to players in that regard. I can understand where people are coming from when they’ve been hurt, because I’ve been through it. Been there and done that.

What was it like going from a player to a coach?

RB: You know, I didn’t think it would be as difficult as it was. I thought it would be an easy and seamless transition, but the biggest change was the mindset. As a player you’re only really responsible for yourself, preparing mentally, physically, and emotionally. As a coach, its more challenging because you are accountable for that for the whole team. You’re responsible for managing lots of different types of people. As a pitching coach, it was managing 13 different guys and two, three catchers with different levels of talent, drive and maturity. It was a big change to learn how to address different things with different people.

AD: Did you notice any differences playing in the different countries you’ve been able to play or coach?

RB: No, there are definitely differences wherever you go to play. Obviously in Japan, they are very technically sound. Maybe not as much power, home runs, or velocity, but they excel at being fundamentally sound. In the states, it’s very much power and velocity different. In Mexico, it’s a bit of a blend of both of those styles.

AD: So what attracted you to manage a team in the Winter League?

RB: Thats a good question. Obviously I want to move up the chain in terms of coaching, and I felt like I got to the highest point in the minor leagues being a pitching coach at the AAA level. I’ve always wanted to manage, I feel like I have been managing for a few years because of my role as a pitching coach already. As a pitching coach you’re managing the game with the manager, looking ahead at matchups and who would excel in certain situations. I’m just glad I got the opportunity to get it done here. On the other end of it, my dad was my manager for my teams growing up. Unfortunately he passed away earlier this year, and I just think it would be a cool coincidence to do it now.

AD: I’m sorry to hear that, but it does sound like a great way to honor him and follow in his footsteps.

AD: So earlier you talked a little bit about managing different types of people on a team and a pitching staff. How do you think you assist players in terms of their development?

RB: I think it goes down to an individual basis, and understanding where each individual stands. I like to sit down with the player and have them drive the process. At the AAA level we have a wide mix of guys, 16-17 year olds along with veterans, and its important to help each of them understand their role. I want each player to tell me their goals, and what they want to do so we can come up with a plan.

AD: I feel like that’s a good system to establish accountability.

RB: Exactly, they’re the driving force, the race car driver on the course. I’m here to provide the resources to help them succeed.

AD: So what are your expectations?

RB: I think the biggest expectation is to make sure we get the most out of the talent that we have. I think the way you do that is establishing standards, and finding a way to keep players motivated. I know a lot of these guys play year round, and its easy to go through the motions. I played year round so I definitely understand that. But I want to make sure these guys are ready to give 110% every time they go out there.