Ichiro Calls it a Career in Japan 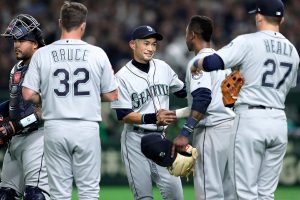 Major League Baseball’s regular season got underway with a series between the Oakland Athletics and Seattle Mariners being played overseas in Japan. While this is a big story in itself, perhaps the biggest highlight of this series is Ichiro Suzuki playing his last games as a Mariner before calling it a career.

Ichiro exited last nights (or this morning’s) game to a standing ovation coming out of the game for a defensive replacement in the eighth inning. This is a fitting send off for Suzuki who played much of his early career in Japan before coming over to the states and establishing himself as one of the all time greats. It was even more of a perfect ending as he finished his career with the Seattle Mariners, the team he is most remembered for playing with.

Suzuki has collected over 3,000 hits, excellent defensively, and was a part of numerous playoff teams. His unique batting routine and stance will forever be remembered, and he served to be a great example for youth playing the game. Suzuki also had a tremendous impact on the inclusiveness of international players into the MLB, especially from the Asian countries. He has been a tremendous ambassador for the sport, and his legacy will live on for years to come.