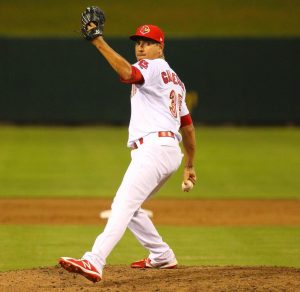 This past weekend, April 13-14, the Cincinnati Reds and St. Louis Cardinals played a two game series in Monterrey, Mexico. The Reds won the first game on Saturday by a score of 5-2, while the Cardinals struck back on Sunday to win 9-5. MLB has played a handful of games in Mexico the past few years, and the turnouts have been amazing. MLB players are able to experience the vibrant and electric atmosphere that Mexican fans bring to the ballpark for the teams in the Mexican League.

The Mexico Series was also special for Cardinals reliever Giovanny Gallegos, who is the only Mexican-born player on the Cardinals’ roster. Gallegos was called up to be part of the club on their trip to Mexico, and ended up facing two batters in his team’s win on Sunday. Gallegos had played at Estadio de Beisbol Monterrey previously, but was ecstatic to pitch there again as a member of the Cardinals.

Mexico will also host another series later on in the season with the Astros and Angels playing on May 4-5.