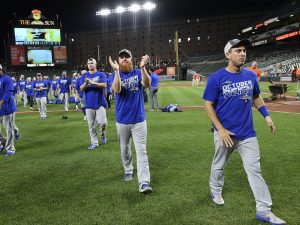 It was expected before the season that the back to back World Series runner ups would once again be in contention to play in and perhaps win the Fall Classic. Earlier this week, the Los Angeles Dodgers became the first team to punch their ticket into the playoffs after a 7-3 victory over the Baltimore Orioles.

The Dodgers held the division lead for the majority of the season, and have not looked back. Their roster boasts tremendous depth in all phases of the game. Their pitching staff anchored by veterans Clayton Kershaw, Hyun Jin Ryu, and Rich Hill, and young phenoms in Walker Buehler and Dustin May. Their every day lineup also features depth that sets them up for success against right and left handed pitching. Power bats of Justin Turner, Joc Pederson, Max Muncy, along with young stars such as Alex Verdugo and Will Smith put up tremendous offensive numbers.

The Dodgers hope that once the playoffs come around, closer Kenley Jansen will square away his struggles and return to elite shut down form. Jansen’s ERA of 3.79 is the highest its ever been in his MLB career. Additionally, he has blown an alarming 7 saves this season.

The Dodgers are still playing meaningful games into September. Home field advantage is still at stake, and it will be interesting to see how the playoff brackets shake out.