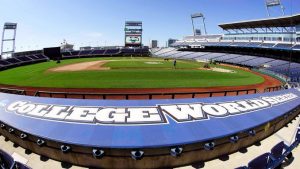 With the MLB season approaching the all-star break, the NCAA Division 1 College World Series is nearing its culmination, with college baseball powerhouse Vanderbilt taking on Michigan.  The tournament is unique in the way that it brings the final 8 teams in playoff contention to Omaha, Nebraska to compete in a double elimination bracket, with the top two teams playing a best of 3 series for the overall championship. To no surprise, there are several teams from the very strong SEC conference.

The tournament has featured fierce competition since day 1. Auburn and Mississippi State played a very exciting game. Heading into the bottom of the 9th, Auburn held a 4-3 lead, but a throwing error and base hit eventually led to Mississippi State walking it off.

Another highlight from this year’s tournament was the game between Vanderbilt and Louisville, with the winner advancing to the championship series. Down 1-0 in the 7th, Louisville made a daring call stealing 3rd with 2 outs in effort of jump starting the offense. It worked as the Cardinals took a 2-1 lead that inning. Cardinals starter Luke Smith was excellent, and pitched into the 9th inning before surrendering a game tying double. Vanderbilt regained the lead in the 9th, and moved onto the final.

The final game of the tournament will be played tomorrow, June 26th. The series is currently tied at 1-1, with Michigan winning the first contest and Vanderbilt winning today. Pitching has proven to be the deciding factor thus far. Michigan’s Tommy Henry through 8.1 innings surrendering only 3 runs, and striking out 8, while freshman phenom Kumar Rocker came up in the clutch throwing 6.1 innings and striking out 11 to even the series.

The College World Series encapsulates a unique excitement and passion that all college sports seem to bring, and does an excellent job showcasing the next batch of talent rising through the ranks.