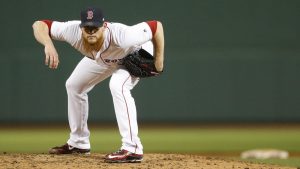 The waiting game is finally over for one of this offseason’s most decorated and reputable free agents. Veteran closer Craig Kimbrel has been reported to have agreed on a deal with the Chicago Cubs. Teams had withheld from reaching a deal with Kimbrel and starter Dallas Keuchel once the season began, as signing them before the draft would have cost teams a draft pick. With the draft now over, Kimbrel and Keuchel can sign with teams without any draft compensation.

Kimbrel just came off a World Series run with the Boston Red Sox. He was a huge part of their success, acting as an anchor in a fairly inconsistent bullpen. The hard throwing righty will be a welcome addition to the Cubs, as they will need to maintain a competitive bullpen in what is arguably the most competitive division in the league right now. The NL Central will be an interesting race to watch with the Cardinals, Brewers, Cubs, Pirates, and Reds all playing competitive baseball at the moment.