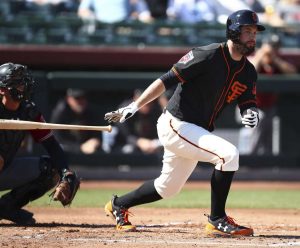 Belt fouled off 16 two-strike pitches before lining out to Angels right fielder Kole Calhoun. The at-bat lasted 12 minutes and 45 seconds. It is the most pitches in at at-bat since records began in 1988.

Belt saw eight pitches in his second at-bat against Barria in the third inning, this time singling as the Giants loaded the bases again, this time with no outs. Barria was then removed from the game after he had thrown 77 pitches.

He was charged with two earned runs as reliever Noe Ramirez allowed two of the runners to score.

Belt also homered in the fifth inning in a nine-pitch at-bat vs. Blake Parker and singled on the first pitch from Jim Johnson in the seventh.