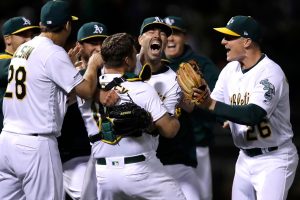 On Tuesday May 7th, Oakland Athletics pitcher Mike Fiers tossed his second career no-hitter against the Cincinnati Reds, the first no-hitter of the 2019 season.

It seemed fitting that Fiers would accomplish such a feat on a day that featured its share of strange occurrences. The game was actually delayed by 98 minutes due to problems with the Oakland Coliseum’s lighting system. Additionally, there were a number of plays that preserved the no-hitter, including an outstanding home run robbery by A’s Center Fielder, Ramon Laureano in the 6th inning. Fiers also had to throw a total of 130 pitches to get the job done, the second-most pitches needed to throw a no-hitter since Fiers himself accomplished the feat in 2015 throwing 134.

Fiers has been relentless both on the mound, and throughout his major league career which started in 2011. He’s played for a number of teams including the Brewers, Astros, Tigers and now A’s. With the style of play changing around him, Fiers has been able to make the necessary adjustments to accentuate his strengths and find success.