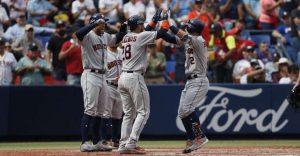 The final two game series to be played in Monterrey, Mexico took place this past weekend between AL West Division Rivals the Anaheim Angels and the Houston Astros. This series is the last of a total of three series to be played at Estadio de Beisbol Monterrey, which all drew tremendous crowds and showcased the passion and spirit for baseball in the country of Mexico.

This weekend, fans were treated to plenty of offense, as the Astros swept the series against the Angels, putting up 24 runs in the process. At the center of the offensive outburst was Astros third baseman, Alex Bregman. Bregman hit multiple home runs over the weekend, with one being a grand slam.

Many players were surprised with how much the ball flew in the stadium, as many balls were hit for home runs, or at least the warning track.

Astros manager AJ Hinch said that the ballpark seemed to reward hard contact, whether on the ground or in the air.

Estadio de Beisbol Monterrey is the home field of the Sultanes Monterrey Mexican League baseball team, and is the largest stadium in the country. All season long, fans bring their intense passion and energy to support Sultanes, making it a very unique and energetic environment to play in.