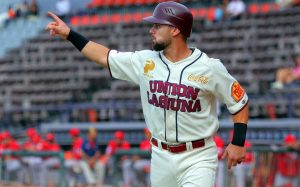 Last month, the Boston Red Sox and New York Yankees ventured overseas to London and played the first MLB series in England. The fans were treated to an offensive outburst by both teams. In the first game, the score was tied 6-6 after the first inning. You can read more about that series here.

Earlier this month, the Algodoneros Union Laguna and Rieleros de Aguascalientes of the Mexican League put on a similar performance. Like the Red Sox and Yankees game, the score was tied 6-6 after the first inning. There was plenty of traffic on the basepaths, as there was a total of 33 hits, 20 walks, and 3 errors between the two teams. Both teams were excellent with runners in scoring position. The Algodoneros went 9 for 20 with RISP, and the Rieleros went 7 for 19.

Left Fielder for the Rieleros Michael Choice hit 2 home runs in the game, along with a double. Choice spent time in the Oakland and Texas organizations before coming down to Mexico.

It was definitely a night to forget for the pitching staffs of both teams.