Left-handed pitcher Alex Ross Ross concluded his career this spring as one of the top hurlers in Johns Hopkins baseball history. A two-time first-team All-Centennial Conference selection, he finished seventh on the Blue Jays’ a 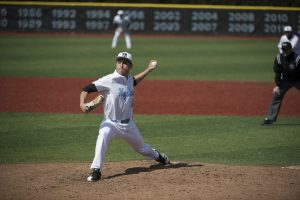 ll-time strikeout list with 196. He was a third-team all-region selection as a junior and earned second-team honors as a senior. Ross allowed batters to hit just .184 against him his senior year and posted a 1.97 ERA.

After a lackluster freshman season and a sophomore season with 17 appearances and four saves, he converted to a starter with a 3-2 record in 12 starts.

Ross’ senior year became his crowning achievement, culminating with a 13-strikeout performance in a conference tournament game in  May.  Although his W-L record for the season was only 4-4, he gave up five hits or less in nine of 11 starts and gave up zero runs in four starts on the year.