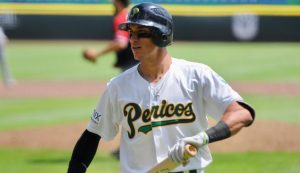 The first interview was with outfielder Nick Torres. Torres is from California, and was drafted out of Cal Poly San Luis Obispo of the Big West Conference by the San Diego Padres. After a few years in the minor league systems of the Padres and Rangers, he has ventured down to Mexico and played the 2019 regular season as a member of the Pericos de Puebla. There,  Torres hit his stride, slashing .315/.404/.565.

Thanks for taking some time out of your busy schedule to talk with me Nick. So is this your first season down in Mexico?

N: I spent this past summer season in Mexico, and this is my first winter league down here.

A: Oh ok, so how has this experience as a whole been, do you notice any differences in the Mexican style of baseball?

N: Yeah, it’s definitely different than the states, but its kind of hard to put into words exactly how. It’s just different. There’s different expectations put on certain aspects of the game down here and vice versa. There’s definitely an adjustment period. But I have learned a lot, and its super important and get out and experience new cultures which is something I’ve really enjoyed.

A: Yeah good to hear. A lot of the feedback I’ve gotten from other guys I’ve talked to has been the incorporation of more breaking pitches and off speed versus velocity.

N: Definitely, its a different game in that respect. It’s not that its harder or easier, its just a different game, might even say it moves at a different pace. Also, the heaviest emphasis is on winning, because this is the highest level down here. So its different than the minor leagues in the states because winning is at the forefront instead of say, development.

A: So what do you think about that emphasis? With the emphasis on winning, does that make it somewhat easier to avoid getting stuck in the mundane day-to-day process? Knowing that each game matters, does that help with staying zoned in throughout the grind?

N: Yes, definitely. That’s something I really like about playing down here. From day 1 you are playing competitive baseball. It raises the level of play for everyone.

A: Yeah that makes perfect sense. I guess that leads into my next question. Individually what are some of your goals that you want to achieve while you are down there?

N: At this point, I just want to make sure I can be the best player I can be. I just want to focus on taking things one step at a time, and figure the rest out as I go. There’s just so much uncertainty in this industry, so you never really know what’s going to happen.

A: Right, exactly, that’s great to hear. So you talked about the day-to-day process a little bit previously, but how does that compare to your initial expectations when you first came over?

N: Well, there’s really no way to prepare yourself for when you come down here. When I first came to Tijuana, I got picked up in a small van and taken across the border with someone I just met. You have to be ok with a certain element of surprise. There’s definitely things about baseball that you have to get used to, but on a bigger scale you just have to get used to embracing the experience.

A: Yeah, I think that’s how you are successful down there, you just have to be willing to explore the new culture as a whole. I think that leads into my last question, how has your love and passion for the game kept you going? How has that allowed you to explore new avenues like this?

N: It has evolved and changed the more experience I’ve gained. The longer you play, the more you start to see it as a job, and you can start to be smarter about the way you work, make things more efficient and more effective. So I constantly want to work on getting better on certain aspects of my game, so that I don’t overwhelm myself. I’ve learned that its a long process, so I might not see results overnight, but its that constant commitment that keeps me going.